These orchids are the most resplendent and noticeable of all the species I’ve spotted so far.  A splash of pink on a tall scape against a spotted gum, sometimes up to my waist (I’m beginning the long journey to scientific measurement!), they can’t be missed. I’ve even spotted them from the car as I drive along the road into Potato Point.

However they are also the most recalcitrant to the camera. Somehow with them I lose my newly acquired mastery of depth of field. Good clear images of the splotched sepals guarantees a blurred labellum, and the luxuriance of blooms – up to 60 on a scape -often leads to photographic confusion and lack of focal point. 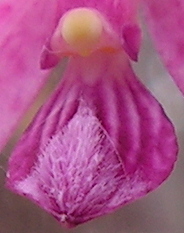 The photographer doesn’t have the luxury of the painter, who can gently relocate flowers in the interests of composition and clarity. To add to my catalogue of complaints, any idea of photographing the tall stems against the backgound of the bush is a delusion. I now sympathise with my father’s frustrated desire to photograph a white sheep on a green hill against the sunset. The real world doesn’t vouchsafe such things, except to the devout and devoted expert.

For the last few weeks I’ve made a short pilgrimage to a colony of hyacinth orchids near the house on the bush block where I spend weekends. They develop slowly, so I’ve managed to capture their progress from a tip, barely out of the ground, 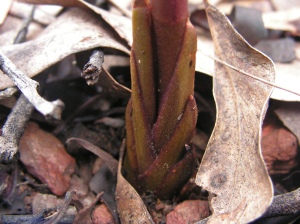 to a tall scape with buds beginning to plump and reveal the characteristic speckles.

If I download a pile of disastrous shots, I only have to walk down past the clothesline for another attempt … and another … and another.

After two photographic sessions on the same day, and close examination of the plants in nature and on the screen, I suddenly realise that I am possibly visiting two species, not one. One lot of scapes is delicate and pale green; the other thick, almost woody, and maroon. This is exciting, but also a bit daunting, because it means I’ll need to expend ID energy again, and I thought I had this one nailed. Fortunately, there aren’t hundreds of cousins to choose from in this species.

My interest seems to augur doom for orchids. Fire took the greenhood; a tractor disappeared sun orchids and glossodias. And this is what I found on my last visit to the hyacinth colony – 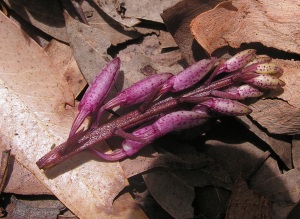 the budding top of the scape neatly decapitated. This plant won’t continue through its cycle to seed pods. 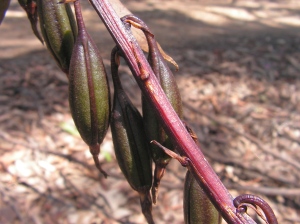 As I rhapsodised in praise of Dipodium punctatum, I remembered that Douglas Stewart has written a number of poems about orchids. I tracked down hyacinth orchids in a poem called Aboriginal axe, and found this to undermine the glory:

Lovely and leprous, flushed and spotted /  The hyacinth orchid bloomed and rotted.

I can handle rotted, but leprous is a bit hard to take. However he does restore some beauty in a later line:

The orchid stands up glowing and tall.

That however wasn’t the end of the dark side. Reading Eucalypts: a celebration  by John Wrigley and Murray Fagg  I found that hyacinth orchids are also hemi-parasitic. I’d noticed that they seemed to particularly enjoy the company of spotted gums (Corymbia maculata). Wrigley and Fagg tell me they grow in the leaf litter at the foot of eucalypts and use a fungus to link with their host so they can draw on it for sustenance. At least as hemi-parasites they bear some of the burden of their own life through photosynthesis.