I often hear a program on Radio National that piques my interest, but I'm tardy and I never get around to participating by tweet or email or voice. Luckily, I'm a blogger, so I can cogitate at my leisure, and in this case use the theme of parks to trawl through memories going back to my childhood. Here are five parks that mark different stages in my life.

The park near Spacerowa, Warsaw

On my second visit to my Warsaw grandtwins, they are 7 months old and it's summer. Most afternoons I wheel them along past the Dolna flower stalls and into the park near the Spacerowa bus stop. There, paths wind through dense shade, lifted up by massive tree roots. In the lake a fountain shoots into the air. I head for our willow tree, spread the rug and haul the infants onto the ground. During my two month stay, they use their park time to crawl, sit and finally stand. They eye off dogs and birds and passers by and sometimes chase after them. They eat twigs and grass and puffed rice and squished bananas. They watch the wind in the grass and roll around on top of each other like puppies. Once I put Janek on the swing while Maja sleeps: I haven't yet learnt how to juggle them both. I'm in babcia heaven: I have them all to myself for a few hours, watching in adoration. Then it's time to buckle them into the stroller and head home, singing nonsense songs to them as they become grumpy and doze off. For a brief time each day I justify my existence as a grandmother in Warsaw, in the park near Spacerowa. 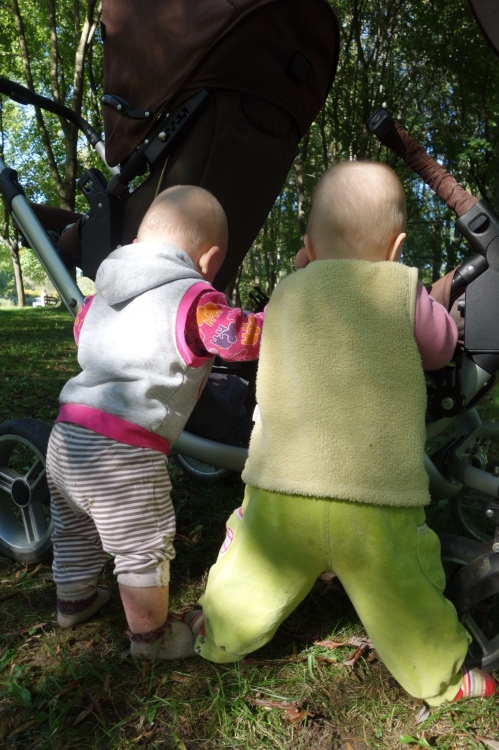 Once upon a time when I was fifty, I lived in Broken Hill. When I felt the need to be near water, I packed a picnic and exam papers that had to be marked and headed out beyond Silverton to Umbumberka Dam. Suddenly I'm past little hills and looking out over a vast expanse of desert, with the road snaking between red dirt and low scrub. Just before the bitumen ends, the turn off to the dam winds up a hill, and I'm back in the land of water, sparkling blue and wet under a thick blue sky. I grab the thermos and my bag, pour a coffee, settle on a stone seat at a stone table and begin work, feeding my eyes on water between papers. In pouring rain, the creek runs vigorously and water plunges down the nearby gorge. I never see this, because the road from Broken Hill becomes impassable. 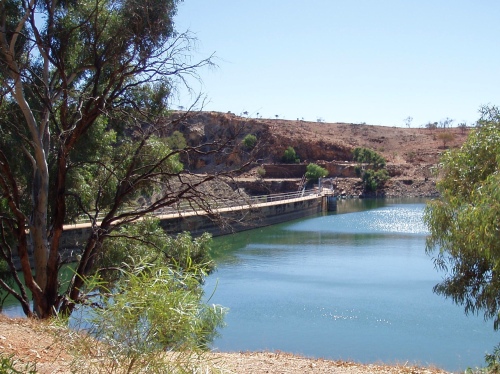 In Berry just north of Nowra, there's a fenced park with a rotunda. It was there we pulled out of bumpertobumper traffic one Easter weekend when my forty-year-old daughter was still bottle-fed. It was there we unloaded the ebullience of four children in a vain attempt to eradicate yippees for the rest of the journey to visit Sydney grandparents. It was there we stopped on the journey back from a Sydney hysterectomy and I sat with a lapful of pain and letters, resting and relishing the concern of friends. It was there I tasted my first artichoke heart in a picnic prepared by my bottle-fed baby when she came south for a rare visit many years later. Visiting from Warsaw last Christmas, my grandtwins picnicked there, sitting back to back, and eating from hands curled around their supply of puffed corn.

I'm twenty-eight and a new parent. I put my daughter in the red and white striped stroller and set off down the Bridge Rd hill to a piece of empty grass called Granny Smith Park. It's not like nowadays parks: no swings or slippery-dips, no little cubby-houses, no merrygorounds, no flying fox, just a sweep of tussocky grass down to a depression which becomes a swamp, even a creek, in heavy rain. This mothering thing is new to me. I'm used to spending my days in classrooms, not angsting over how to treat a three month old. But here we are, out in the sun, halfway between where I live now and where I grew up, in a park name after a relative who grew a new kind of apple. 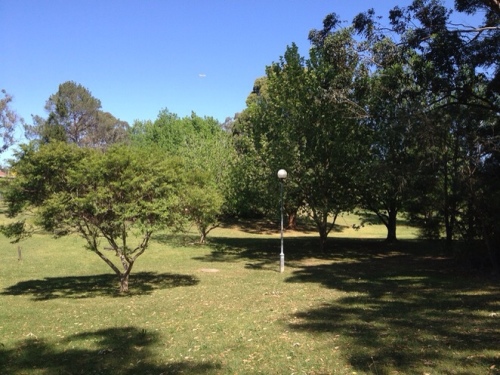 One of the highlights of my year as a child was the Sunday School picnic at the Lane Cove river. I can still feel a tiny bit of the excited anticipation that filled the weeks leading up to the Day, and the anxious watching of weather in the few days before. I can see again the grassy slopes we rolled down, the food canopy pitched amongst the rocks, the long flat where we raced in sacks, carrying eggs on spoons, and in the tumble and confusion of the three-legged race. The swings and whirly platform were tame by today's standards, battered and worn, no primary colours, but no worrying about public safety either. Children devoured watermelon and lurid cordials and white bread sandwiches with devon or egg fillings. Romances began and flourished and ended. Mrs Sulc knitted whole jumpers – in Czechoslovakian, my mother said, intrigued by the speed of her fingers. In the afternoon there was the excitement of rowing up the river in hired rowboats.

When I was older, I rode my pushbike down for a day's boating with my brother and his mate, my eventual husband. Our courtship picnics took place there too: it was close enough to my work place at Macquarie University for a snatched lunch and lounge. Then – and this was forty years ago, when the river was clean – we'd take our daughter down to swim, and we picnicked there with our Sydney children and their grandparents. Much later, when I was revisiting childhood places in 2000, I hiked through the sandstone bush along the river from De Burgh's bridge. Once a rackety wooden construction high above the gorge which made my stomach drop, it was now a six lane swoop, the river flowing invisibly far below.

Photos, except the twins, were all purloined from the Internet.