Brown often has bad press. It suggests words like murky, undistinguished, gloomy, dreary, commonplace, lacklustre, unmemorable, banal, insipid. However when I began to investigate it as a photo theme I found that drab colour vivid and full of stories

At the Great Masters exhibition at the National Museum of Australia a tin of ochre chunks was on display as part of the kit of one of the master painters. Brown ochre was used as a pigment in the cave paintings at Lascaux and master bark painters in Australia still use it to create their subtle beautiful-toned masterpieces. The name for brown ochre is Goethite: suddenly Goethe, eighteenth century German poet and scientist, intrudes in the history of brown and on the palette of artists.

Mummy brown was a favoured colour for centuries, a brown of “good transparency”. And yes, it was indeed created by crushing up mummies. When nineteenth century artists discovered its origin, they stopped using it. Legend has it that the pre-Raphaelite Burne-Jones ceremonially buried his tube of mummy brown in his garden when he realised what it really was.

Isabelline, a pale cream-brown or parchment colour, usually refers to the colour of bird plumage and horses, but is also used to describe the colours of fashion. Elizabeth I owned “one rounde gowne of Isabella-colour satten … set with silver spangles”. The regal nature of the colour is undermined by a story that its name derived from the colour of underwear worn – and not changed – by an Isabella during an eight-month siege in the fifteenth century.

Made by combining red, black and yellow, brown is a colour of multiple identity, nudging its way into many shades of the spectrum: towards orange or crimson or white or green or blue. In the world it's gregarious, displaying itself best in judicious companionship with other colours or against a background that serves it well, maybe beige and dark brown fungus against sharp spears of green. The litany of brown is in fact poetry: burgundy, isabelline, umber, bister, beige, taupe, ecru, fawn, sepia, bronze, chestnut, sienna, sinopia, khaki, cordovan, fulvous, maroon, tan, wenge, russet, buff, mahogany.

Not drab at all. 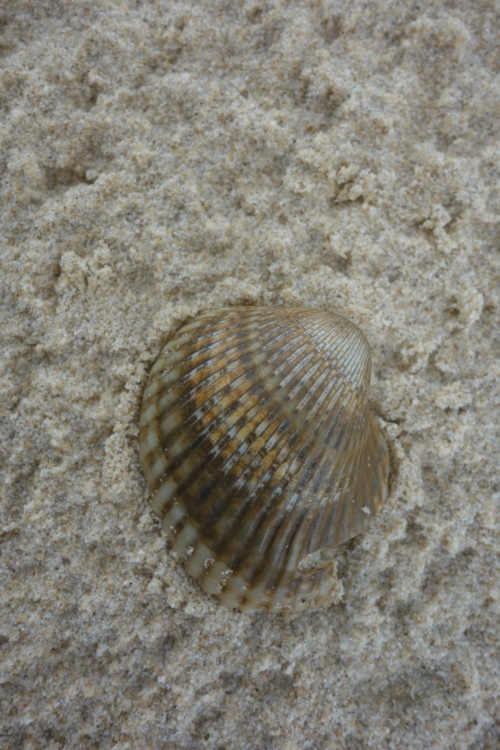 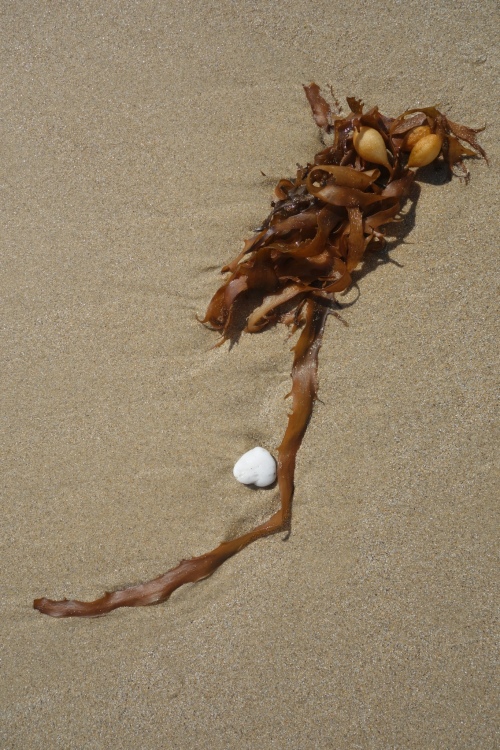 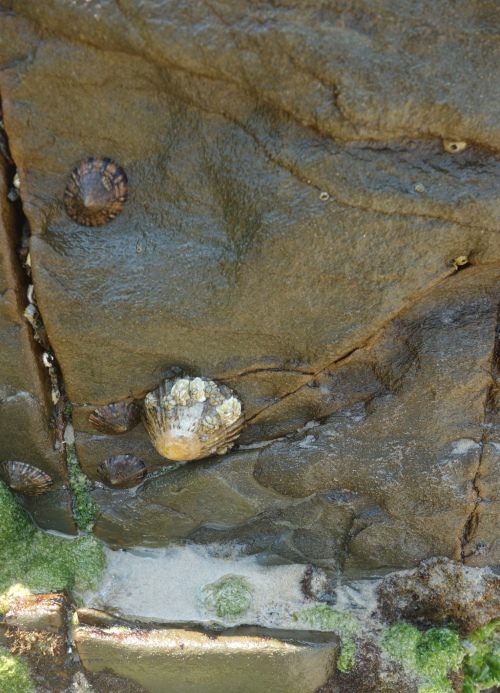 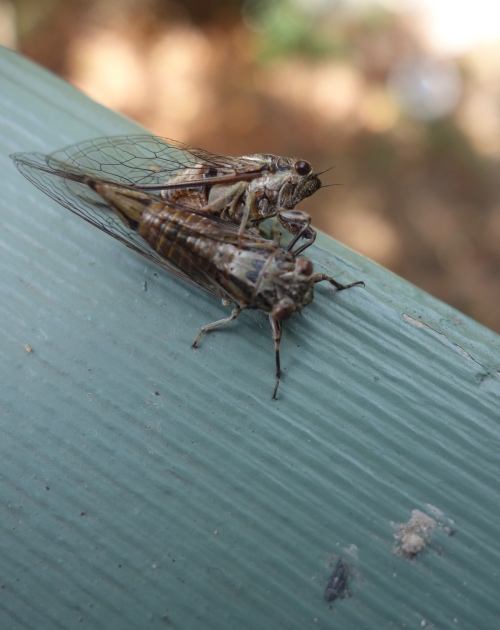 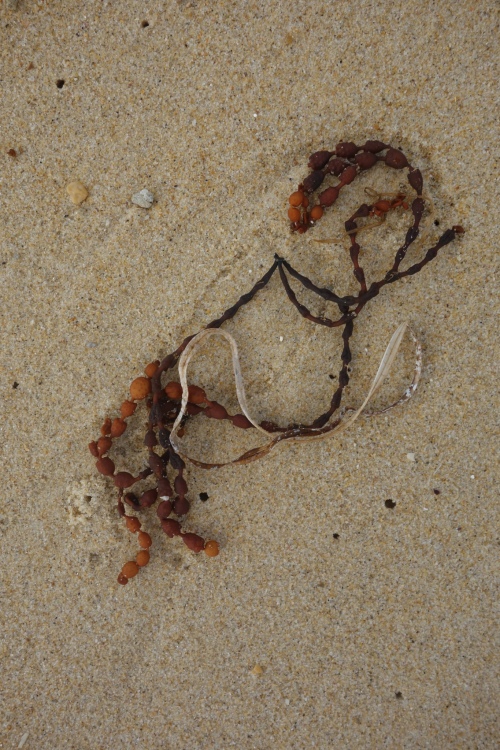 Wikipedia is my source for the stories retold here, and the blog was inspired by a long-ago photo challenge whose deadline I well and truly missed.

I don't need much to give my mind delights that I can revisit in deep night with deep pleasure. Mind you, I also wonder about a mind that finds such easy, minute enjoyment.
Stair light
It all began when the light above the stove blew. Over three days of greasy groping, I worked out how to slide the cover off and remove the dead globe. My confidence grew.
At the bottom of my stairs I have a very blingy mini-chandelier. For ten years it has been globeless and I've fumbled my way upstairs in the dark, or made a huge effort to remember to take my head-torch on a rare after-dark journey. Why didn't I replace the globe? It looked like an odd size and I didn't want a collection of misfits. To peer under the chandelier skirt required me to balance on a milk crate on one of those turning-corners, wedge-shaped stairs. All too hard!
Until a recent return-from-Warsaw access of fix-the-house. I risked the balancing act; ascertained that it was a bayonet pin I needed and risked spending $5 on a globe that might be wrong. I balanced again, vicariously this time, dragooning a passing visitor, and watched as he twisted the globe into place. Suddenly the dark abyss of the stair well became a warm pool of light, and I developed the habit of switching the light on every time I passed the top of the stairs, gazing into the light pool as I do into rock pools.
Having had the let-there-be-light experience, I became addicted. Three outside lights had also gone dark, so I called the electrician to check and re-illuminate them too.
Parsley
Driving home from book club and a sleepover, I decided I'd better buy the two new tyres that I probably needed for my Queensland trip. I didn't want to. I was in the middle of finalising flights and accommodation for Warsaw and I needed an uncluttered mind for final decisions. But I didn't want a blow-out on the Pacific Highway either.
So I pulled into Glasshouse Rocks Rd, and at the trye replacers I found an unexpected outdoor office space where I could sit at a table in the sun under my straw hat and make those decisions and bookings via my iPad. I even tracked down the link to information about applying for a 10 year Polish visa, confident that my one-year Visa D was in the mail. I had time to soak up the sun and watch the passing parade: the man, strapped for cash, weighing up options at the counter in a slow drawl: the woman with black nail polish on her toenails and mobile in hand; the car that stopped and five minutes later engine-coughed; the old couple who had to release themselves from their vehicle slowly and uncertainly.
As I sat idly and a bit sun-dopey, I saw a flourishing patch of parsley in the most unlikely place. It was growing out of the paving hard against the brick wall. It matched my gold standard for parsley, in the garden at the Blue Earth cafe in Bodalla: thick, green, tightly curled, watered occasionally by hand but mostly by heaven, and obviously finding that place in the sun as congenial as I did.
I left with two new tyres and a bunch of parsley to sprinkle thickly over Saturday morning's steamed veggies.

Sea stars are beautiful. They are thickly embroidered and their shape is pleasing. They rest at the bottom of pools, which are also beautiful, with emerald green and mauvey pink weed, orange lichen and ripples, splashes and shadows. Their companions are anemones, camouflaged crabs and rambling sea-slugs with iridescent backs and seeking horns. However, their world is limited to this one rock pool: unlike me they can't wander around peering into other rock pools, stroll along the beach or amble through spotted gums or casuarinas. Nor can they blog, settle down with a good (or not-so-good) book, visit art galleries or go to the movies. The pleasures of grandchildren are unknown to them

Their capacity to regenerate when they are hurt is enviable, especially as I age and fear the losing of bits, but I think I prefer sending my food to my stomach, rather than extruding my stomach to search for and ingest food. 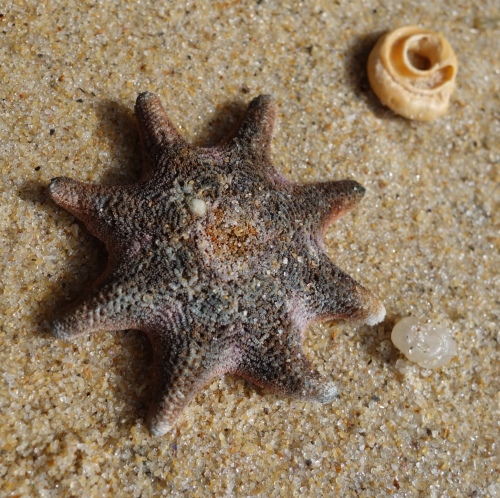 On the whole I'll stick to being what I am. There isn't much chance that I'll be wrenched from my home in the tiny rainforest of my front yard and transported to SeaWorld, plonked in a barren pool and made available for passers-by to stroke, although come to think of it I may be carted off to a nursing home.

Feel free to pat me! A SeaWorld starfish

Why is it that the beauty of randomness is so hard to achieve? In nature non-patterns have many charms – in fact maybe they are a big part of its beauty. I first came across the difficulties of doing random when we were planting my front yard trees. Even when we tried the Edna Walling trick of throwing potatoes into the air and planting where they fell, we were tempted to make human adjustments – “Just a bit to the left, maybe” – and suddenly our desired random became orderly stilted.

I realised again nature's skill at the random, and my ineptitude. My hand wants to arrange: it's not capable of leaving it to chance. It finds it hard to accept that the fortuitous, the haphazard, the accidental is a far better beauty generator, and impossible to replicate.

For evidence, compare the pebbles and shells nature leaves in heaps in declivities and trenches with my attempt to create such a careless arrangement on the beach. The word “arrangement” is probably the key to my failure and so is my “selection” of shells. Any human attempt at agency seems doomed. 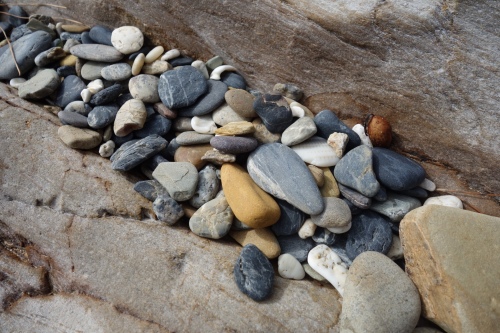 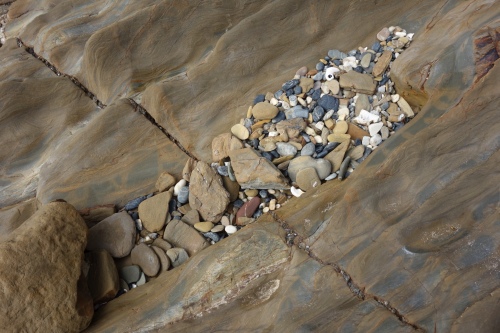 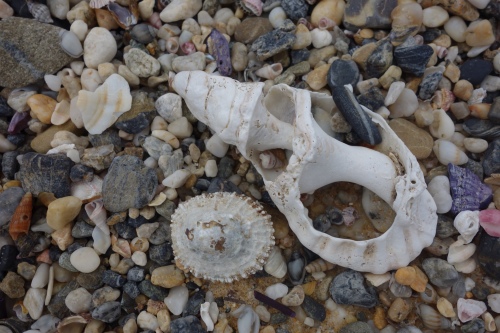 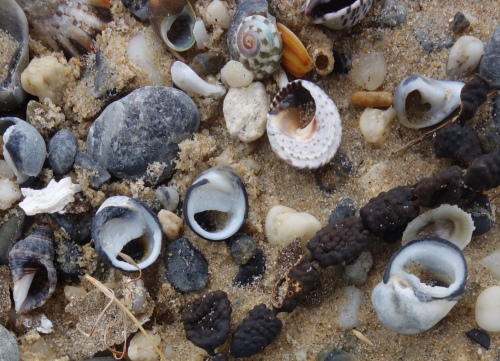 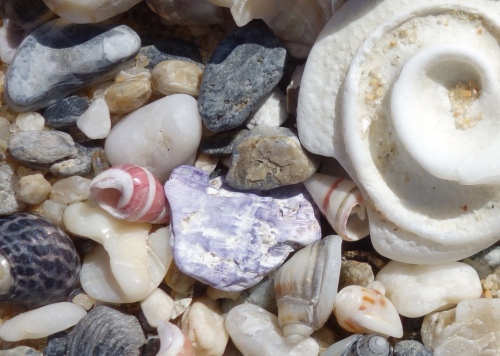 After these delicious assemblages, here are my shameful attempts, one too ordered and one excessively chaotic.