At last I can get a fix on April. It's mushroom month, at least this year. After this morning's walk I have a neatly packaged question: a different species, or just a different size, shape and colour at different stages? 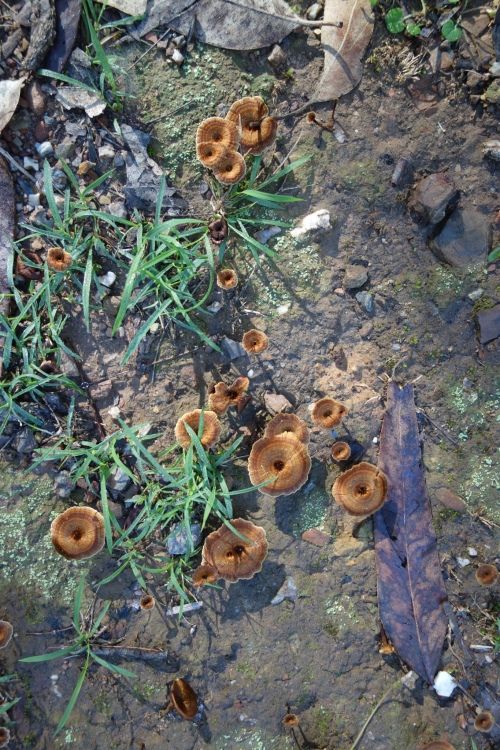 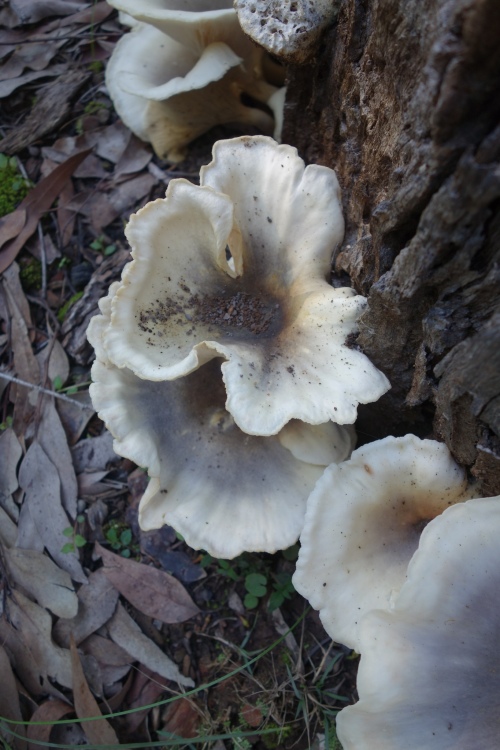 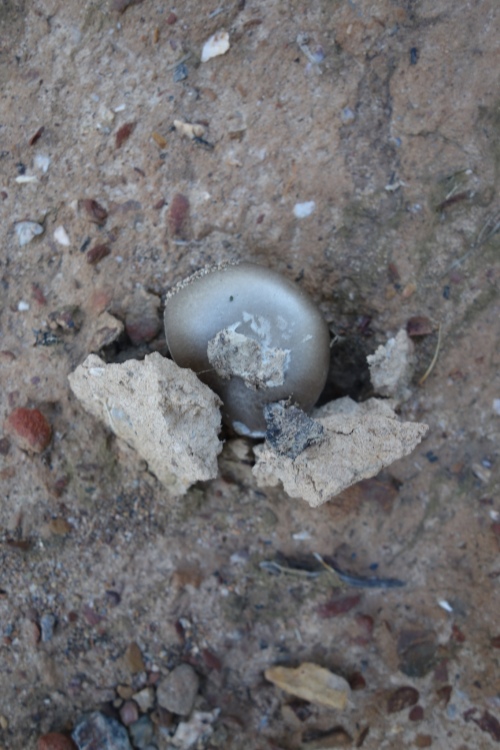 One of the things I like about mushrooms is the way they push up through whatever bars their way into the world, carrying traces of it with them: dirt, grass, leaves, even gravel. Such power in such soft flesh. 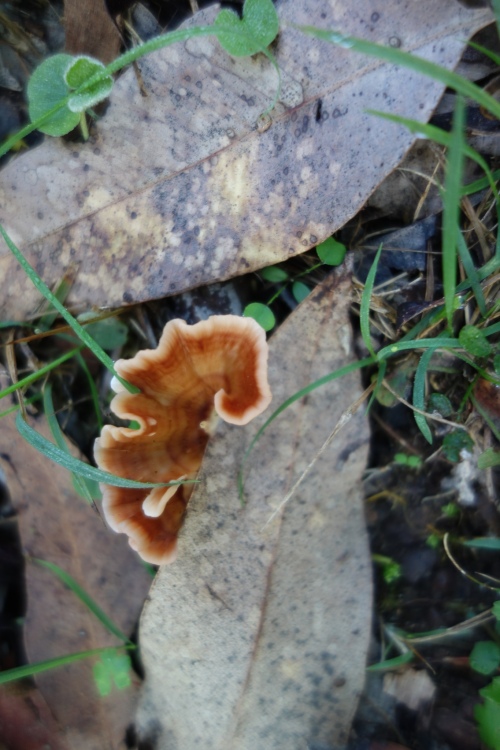 After seeing Julie Ryder's Molonglo: domestic blueprint with its white on white embroidery, my eye was attuned to intricate embroideries on the low tide beach, something I'd never noticed before despite daily beach rambles. 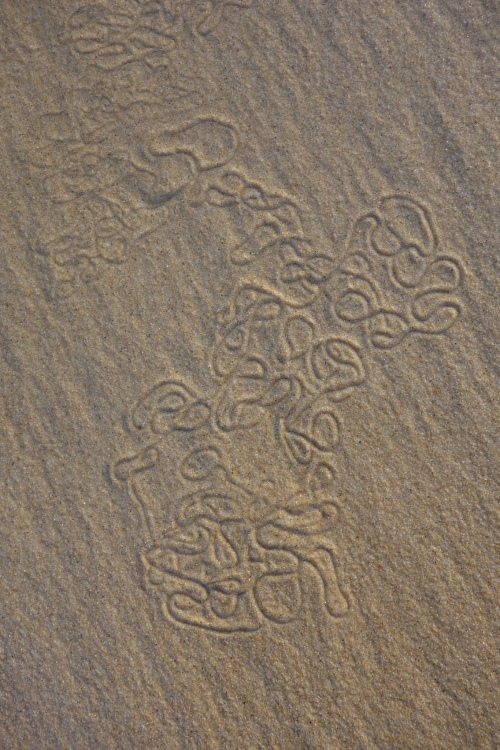 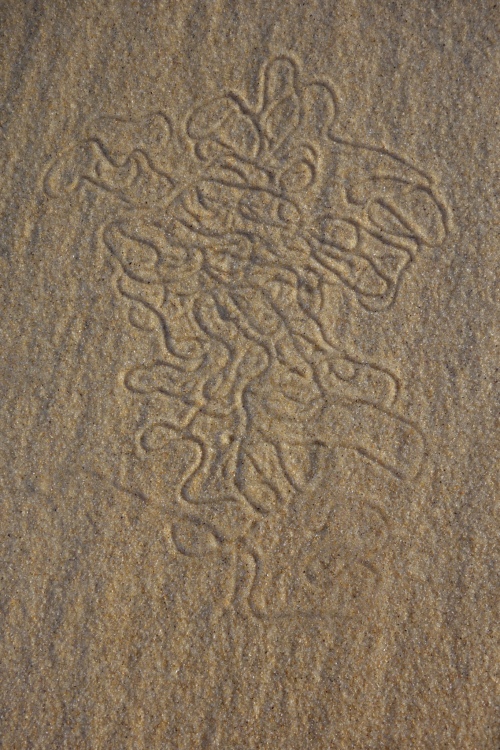 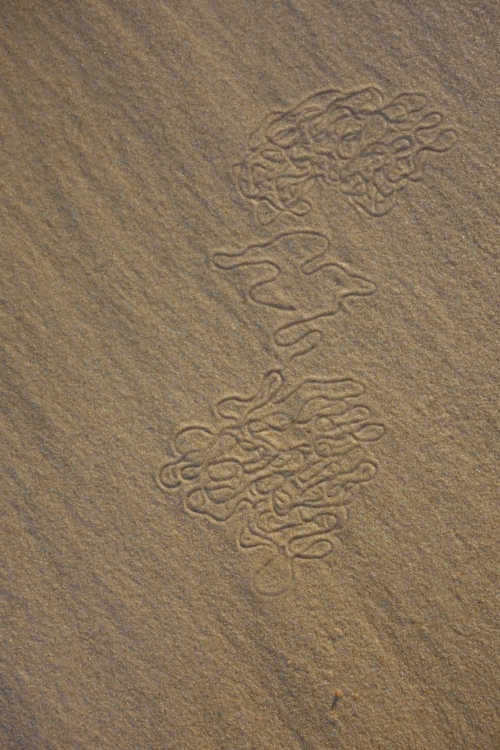 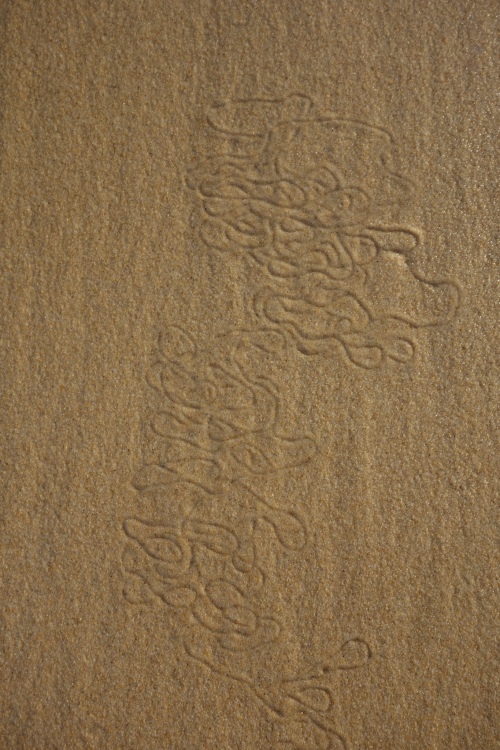 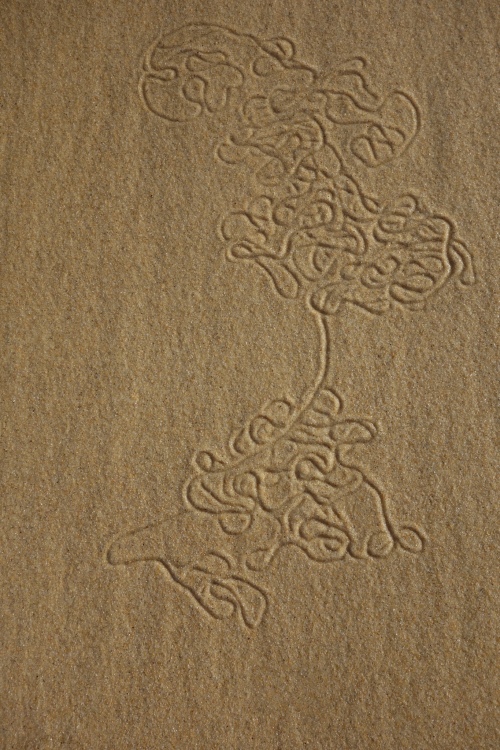 The seas have been rough and many victims of this roughness have ended up on the beach. Walking early means I get along half the beach in shadow. This helps seaweed photography because it removes some of the gleam that tends to draw the camera's eye and eradicate sharp detail. 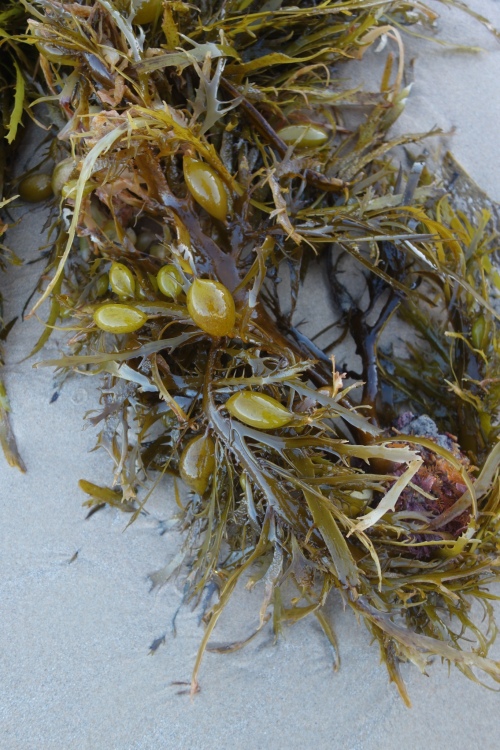 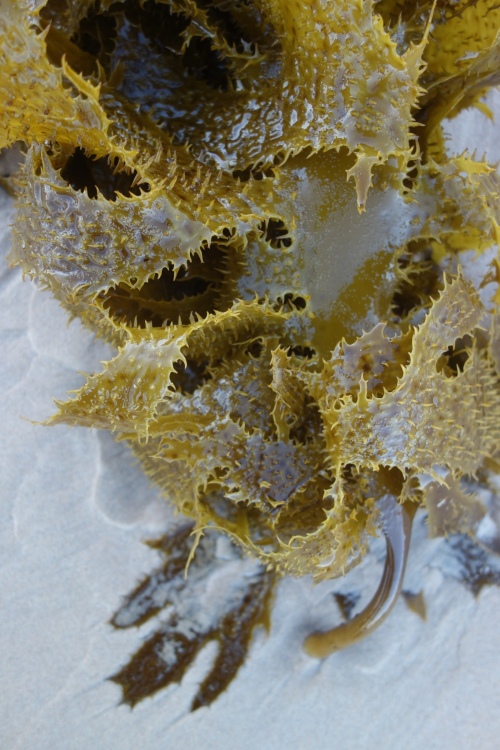 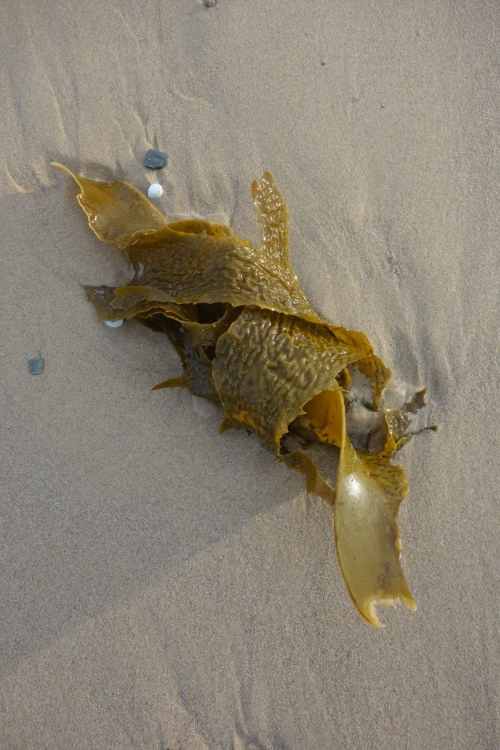 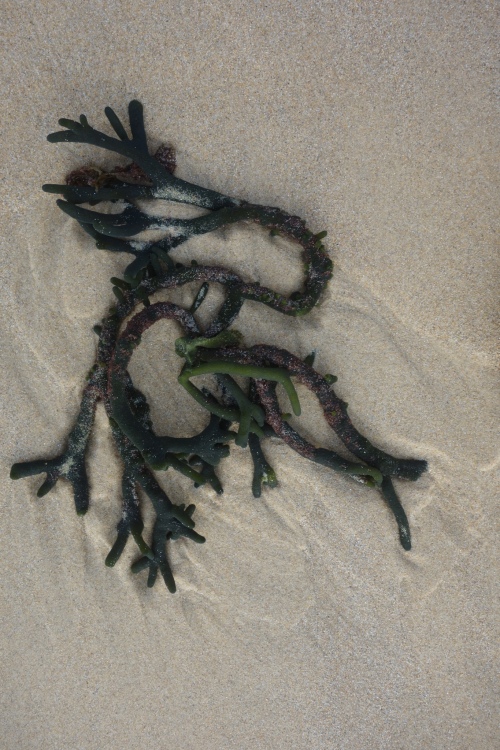 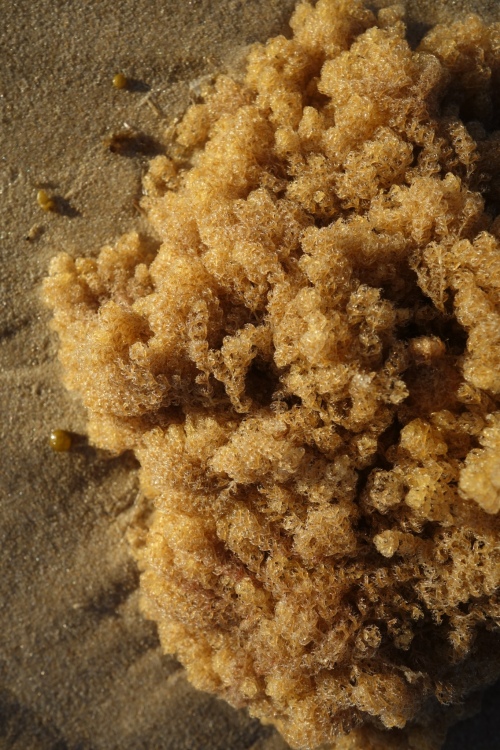 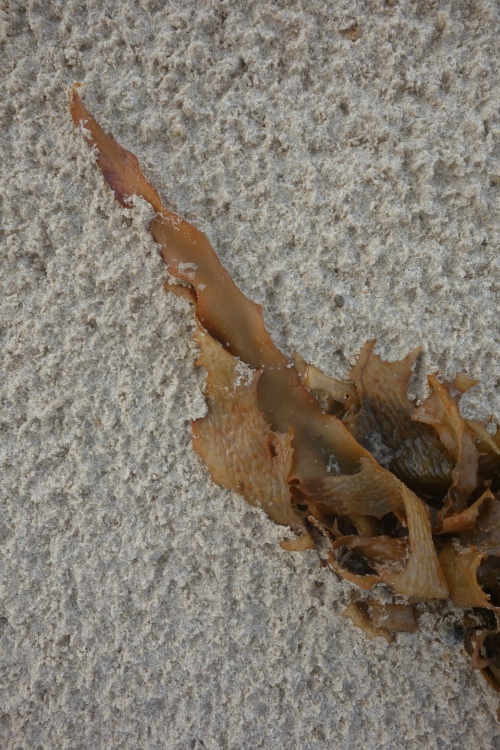 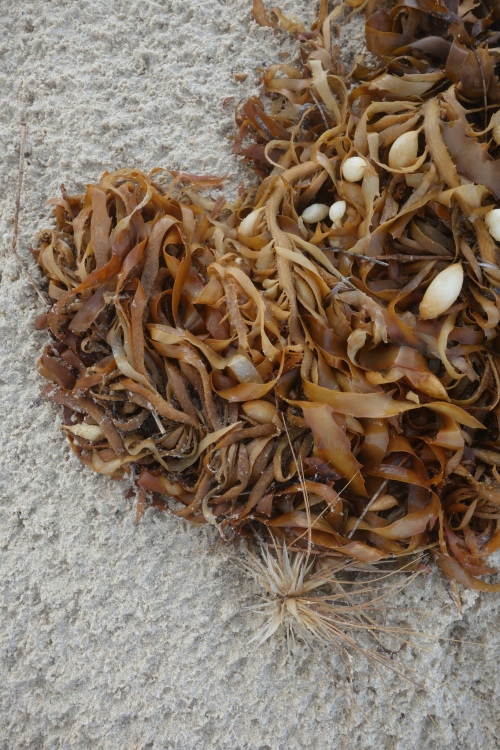 I'm amazed at how quickly I've managed to re-establish a walking habit – after a health coach from my health society made an unsolicited call and prompted me back to walking virtue. As always, I wonder why on earth I haven't been striding out every day, since it gives so much pleasure, sensual and photographic. My legs have a mind of their own and they are ready to go almost before I get myself out of bed. My walking hasn't yet become aerobic, although I've moved fast on a few times as the ocean tries to anoint my virtuous feet. However, on one occasion my head was far away from my feet, trying to work out how to say “Róźa's mother” in Polish, when a rogue wave curled up to my knees before I could activate my agility.

Last night it rained and thundered periodically, so I was on the beach earlier than usual in a rain-lull to enjoy the reduced palette and other special pleasures of a grey day after rain: cloud reflections in the wet sand; shells and seaweed without shadows; rain pocks in the sand; patterns oddly reminiscent of Monet's waterlilies. 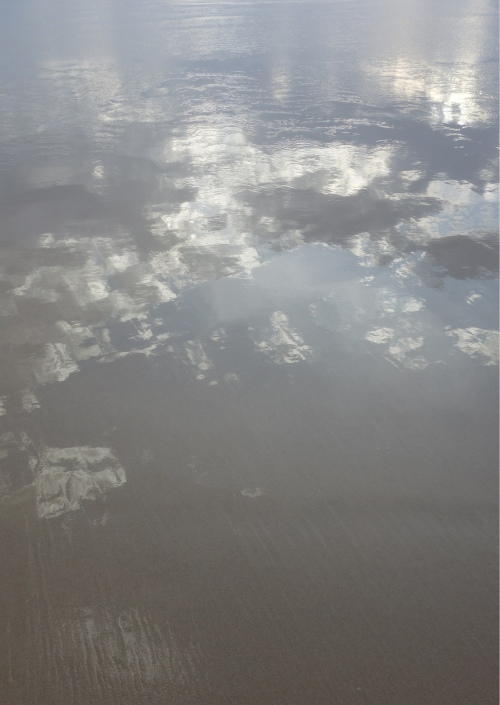 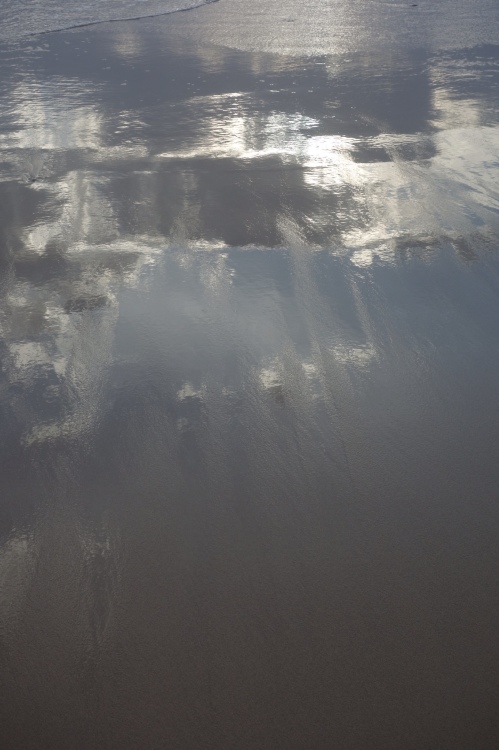 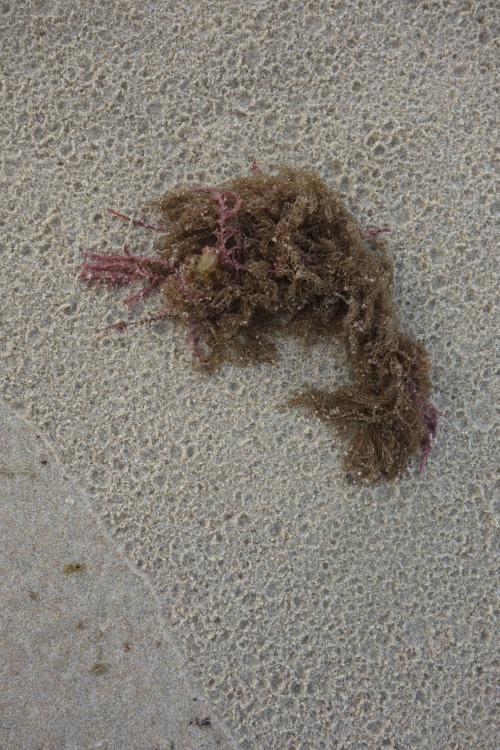 Maybe I was wrong to say a reduced palette. As I look again at the photos it seems that the light has in fact expanded a limited palette, and provided it with highlights that would be unnoticed on a bright sunny day.

There has been enough rain over the last week to open the creek at Potato Point. My morning walk has taken me to the beach as the tide flows, drawing after it ripples, water mounds and intricate water braiding. 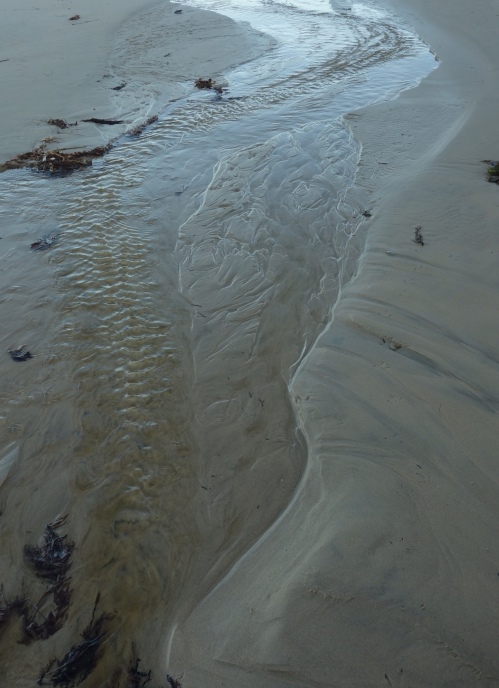 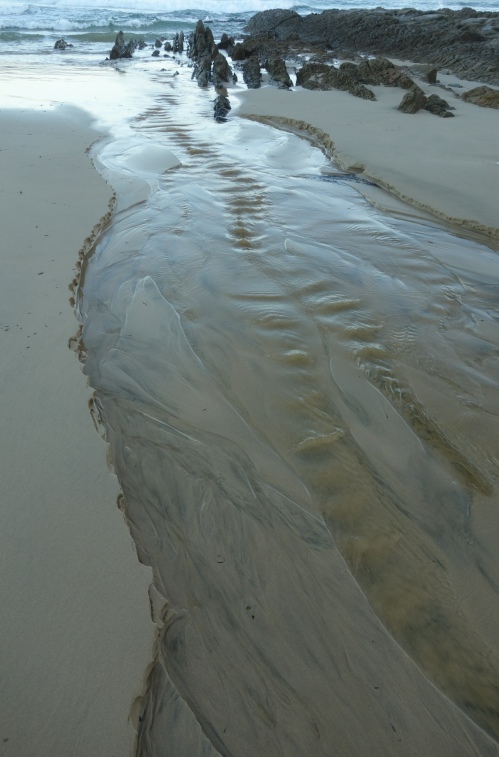 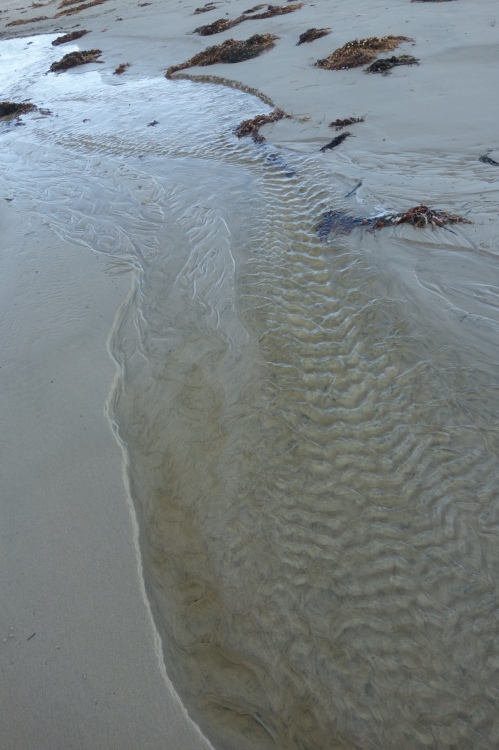 I haven't walked on the headland for many months, in fact not since the passion for rock pools began. Today, that is where my booted feet took me, prepared for puddles and slush, and with no idea what to expect. The sound of heavy machinery was ominous. Unlike the cacophony of frogs, it didn't stop as I approached, and the heavy sea wasn't loud enough to drown out the irritating backing beepbeepbeep. I stopped hearing it when I realised it was on the village side of the backed up creek.

Flowerings began in my front yard. The mint bush was dense with purple-spotted flowers, and both pink and white blueberry ash were crowded with delicate fringed bells. Along the track, orange flowers nestled amongst callistemon greenery; white tea tree blossom massed on the one tree surviving a track clearing exercise some time ago. I spotted a hyacinth orchid which soon became a couple of colonies as my eye tuned in, although the perfect photo still eludes me. Three yellow-tailed black cockatoos flew out of the banksias in front of me at head height. The breakers rolled in and Gulaga loomed beneath a blue sky thick with white clouds. Dark blue striped the silvery-rippled ocean.

Behind the dunes, green moss hosted a fiddlesticks-scatter of casuarina needles: lomandra spiked in yellow clusters against green bracken; branches twisted aslant, parallelling each other; and the ground where birds had been feeding looked like the floor around the high chairs after my grandtwins have breakfasted. 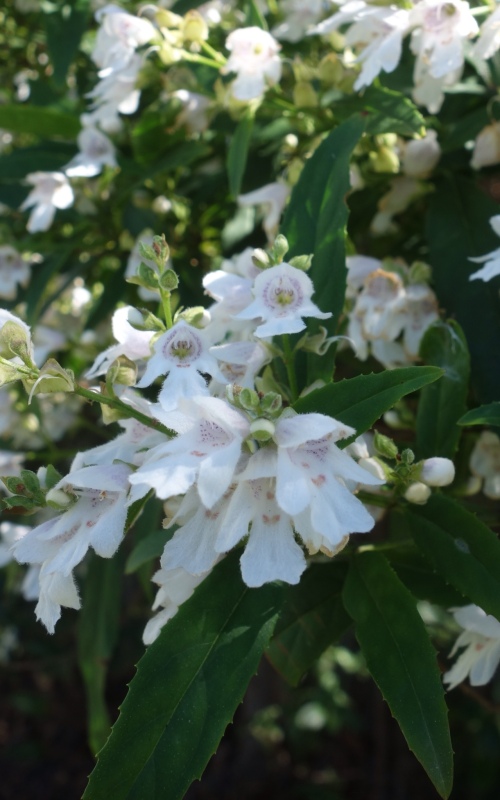 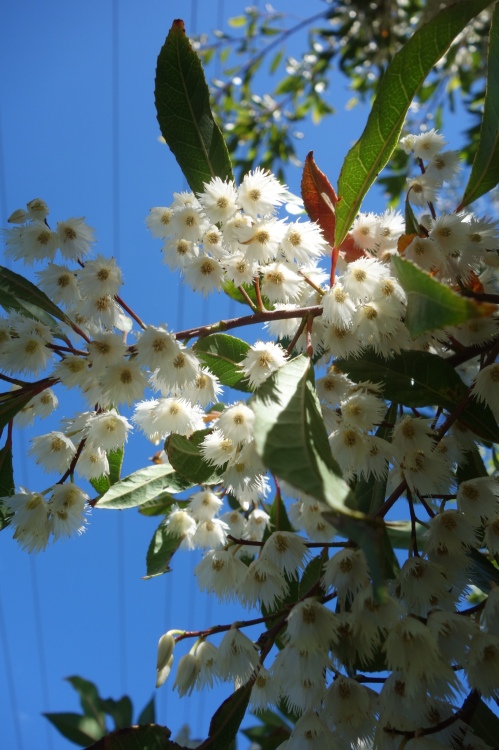 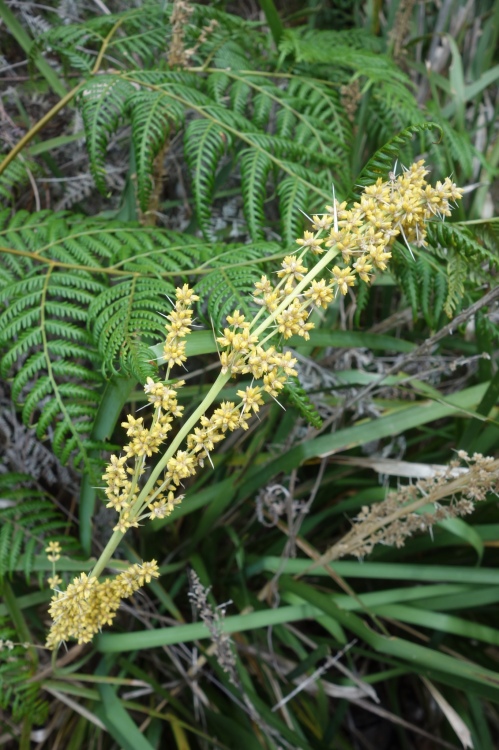 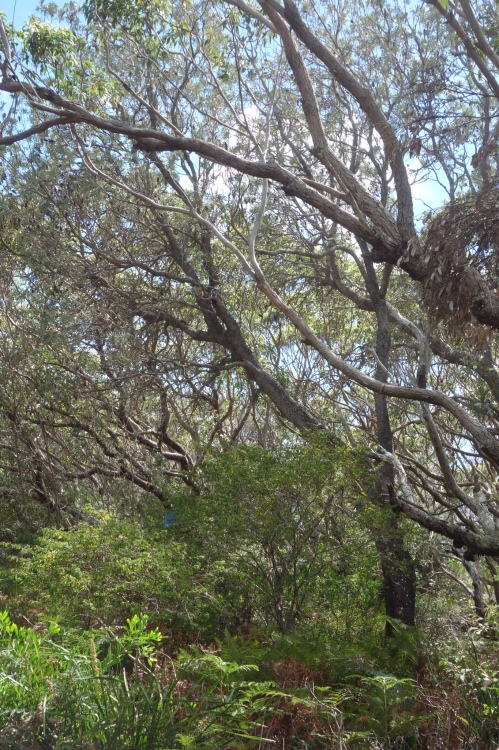 I've been charmed for the last few weeks by the blossoming of creativity in the Secret Fairy Garden near the old tip on the road into my village. Each time I look something new has been added. Today I finally stopped to photograph in the grey light of a blessedly cool damp day. The blue curtains fluttered, the fairy surfer caught a wave and the freshly planted petunias surrounded the bole of the splendid spotted gum hosting this artistry. It reminds me of the year of the trolls, when the bridge over the creek was renamed Troll Bridge, and troll dolls took up residence along its side-boards.

This morning I went out to walk along the beach feeling a bit jaded, and thinking “I've walked the beach so many times. I've seen everything.” And of course nature proved me wrong.

Crossing the dunes, I encountered a lengthy and chubby diamond python. He was unperturbed by my presence, lying along the dappled sand and nosing into a scrubby dune wattle. He didn't move as I circumambulated him, closing in for some closeups.

The beach had collected sea-weed, and amongst it I found my second surprise: large jellies, many a good 30 cm across and 10 cm tall, blue and honey-coloured and viscous. 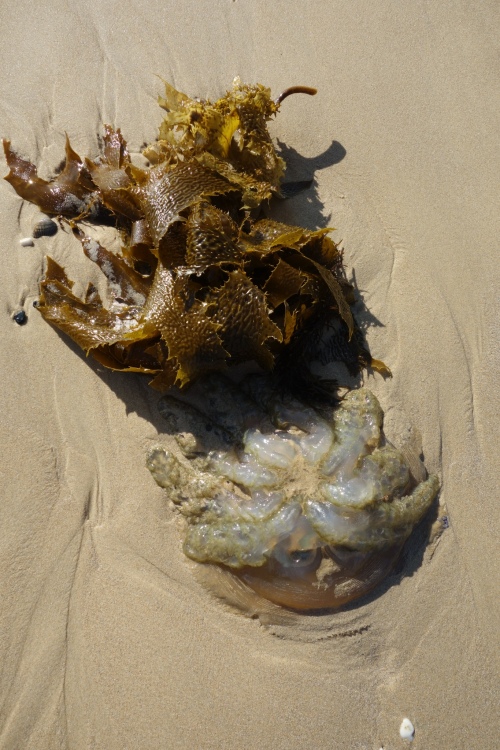 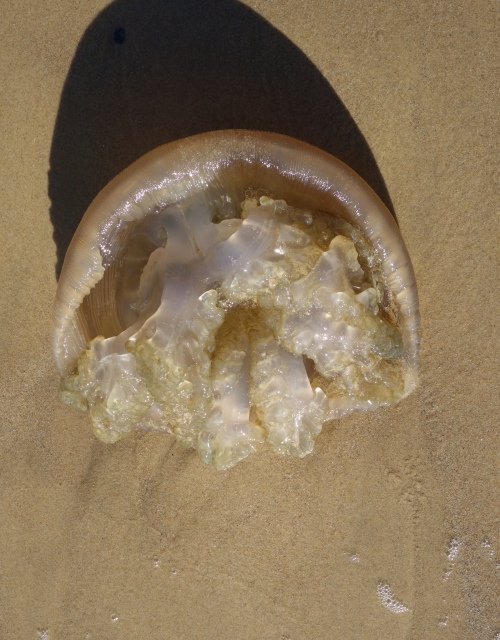 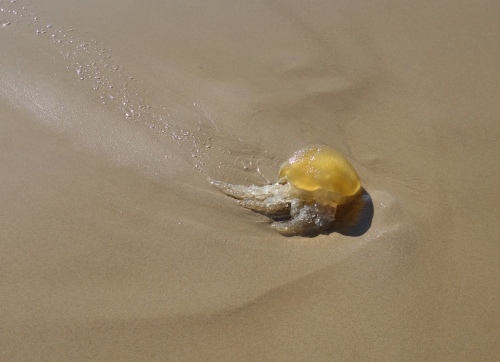 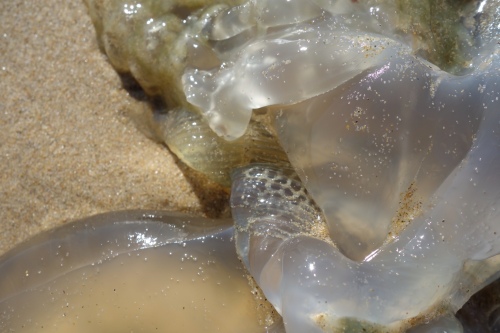 The palette of my jelly finds was very different from that of Christine, only a few kilometres north, and a day earlier.
http://dadirridreaming.wordpress.com/2013/09/24/lll-is-for-lovely-lilac-jellyfish/